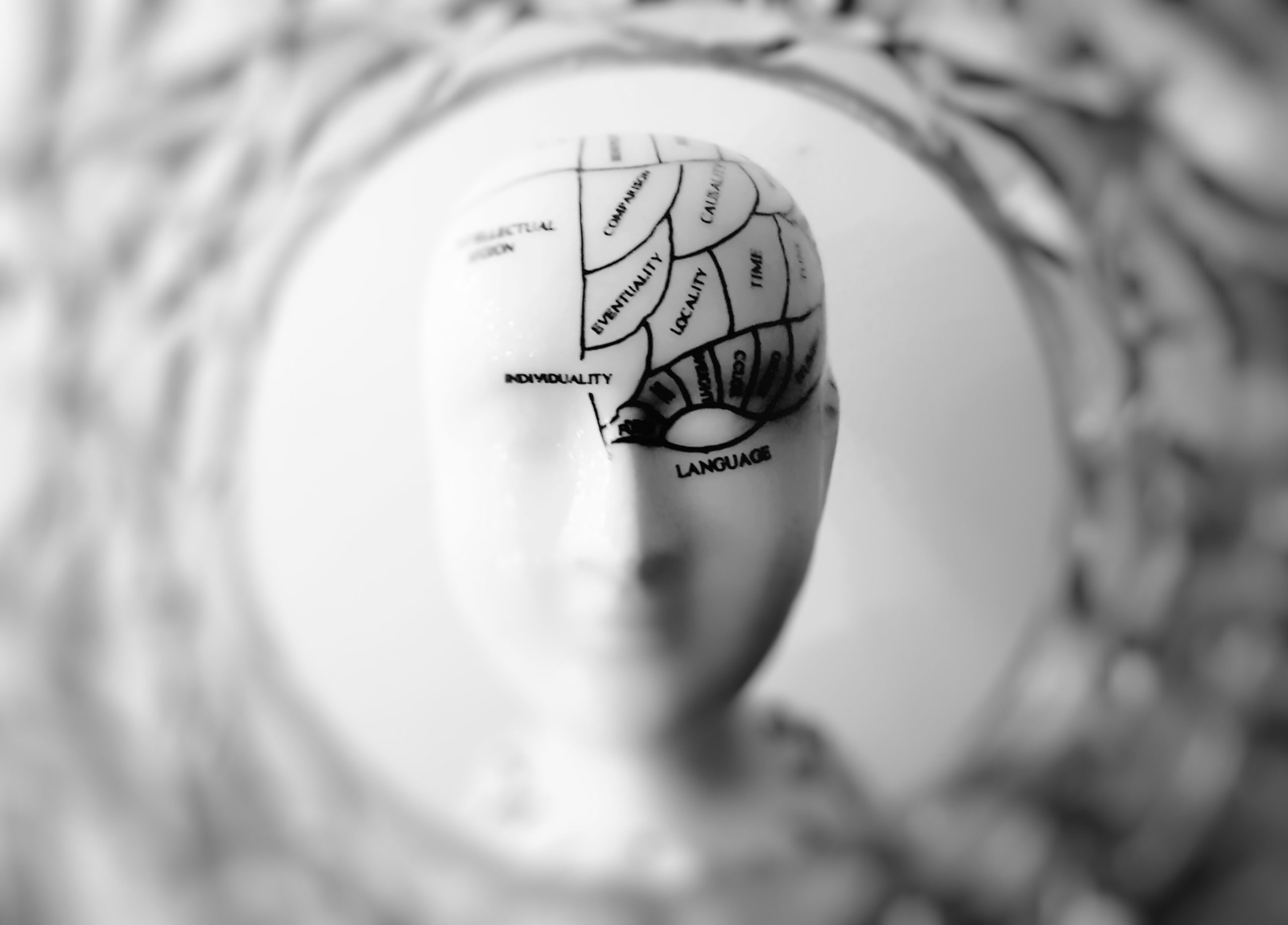 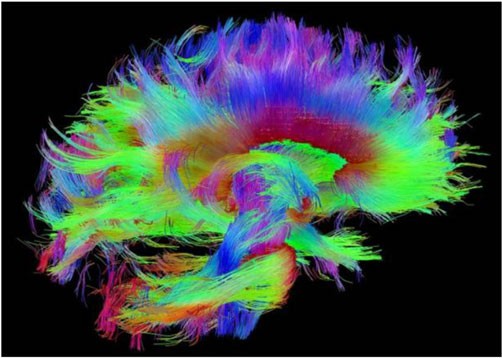 The Global Brain Institute (GBI), founded in 2012 under Francis Heylighen as director, studies self-organization and forms of distributed intelligence emerging from the internet. It uses ‘scientific methods to better understand the global evolution towards ever-stronger connectivity between people, software and machines.’1 As the site indicates the GBI was a part of the Global Brain group that together with a research group at Vrije Universiteit Brussel Evolution, Complexity and Cognition became part of The Center Leo Apostel (CLEA) founded in 1995 as a transdisciplinary research department,2 named after the Belgium philosopher who helped lead a group of scholars to articulate the idea of the 1994 text ‘World Views: from fragmentation to integration’ (Aerts et al., 1994).3 Described as a ‘a short “proposal,” a kind of methodology for world-view construction’ ‘an invitation to look at known facts and theories from another point of view, with new, different, integrating purpose.’ In face of fragmentation, this proposal engages in the prospect of constructing a new world view, its several components, and its purpose before briefing outline 23 projects that can be understood in terms of a kind of unity. As they write:

we look for the unity of the universe in order to discover the meaning of life. Value problems, the relation of ethics, politics, action and reality cannot be avoided. The proposals connected with praxiology, psychiatry, the interaction of language games, the ontology of the various ethical, political and religious systems incorporate this need.

One can see why the GBI chose this monograph as the basis of its inspiration. Heylighen, in a Summer School in cognitive Science: Web Science and the Mind Institut des sciences cognitives, UQAM, Montr’eal, Canada, gave a talk in 2014 called ‘Towards a Global Brain: the Web as a Self- organizing, Distributed Intelligence’ that was emblematic of this call for unity4 which he describes in the following overview:

Distributed intelligence is an ability to solve problems and process information that is not localized inside a single person or computer, but that emerges from the coordinated interactions between a large number of people and their technological extensions. The Internet and in particular the World-Wide Web form a nearly ideal substrate for the emergence of a distributed intelligence that spans the planet, integrating the knowledge, skills and intuitions of billions of people supported by billions of information- processing devices. This intelligence becomes increasingly powerful through a process of self- organization in which people and devices selectively reinforce useful links, while rejecting useless ones. This process can be modeled mathematically and computationally by representing individuals and devices as agents, connected by a weighted directed network along which ‘challenges’ propagate. Challenges represent problems, opportunities or questions that must be processed by the agents to extract benefits and avoid penalties. Link weights are increased whenever agents extract benefit from the challenges propagated along it. My research group is developing such a large-scale simulation environment in order to better understand how the web may boost our collective intelligence. The anticipated outcome of that process is a ‘global brain’, i.e. a nervous system for the planet that would be able to tackle both global and personal problems.

The first three objectives of the GBI are

The fourth is a formulation of greater interest to our readers:

I’m certainly interested in this group and their research and formulations. In the following selection, I have highlighted some publications by Heylighten (2002, 2007a, 2007b, 2011, 2016).

In one of the latest working papers, Heylighen and Lenartowicz (2016) provide a clear concept of the Global Brain:

The Global Brain can be defined as the self-organizing, adaptive network formed by all people on this planet together with the information and communication technologies that connect them into a cohesive system. The idea is that global interactions have made the people on this planet interdependent to such a degree that together they form a single superorganism … , i.e. an organism (global society) whose components are organisms themselves (individual people). As the Internet becomes faster, smarter, and more encompassing, it increasingly interconnects people and computers into a single information processing network, which plays the role of a nervous system for this superorganism … . The function of a nervous system is to coordinate the different activities taking place inside this organism, thus increasing their efficiency and coherence, while minimizing any friction or conflict.

It’s not my intention to critique or even analyze the concept of the Global Brain but simply to suggest it is an incomplete account and to supplement it from the approach from polit- ical economy and at the same time to make a plea that this supplement is worth consider- ing as a necessary element in appreciating any concept of Global Brain because it provides an analysis of the cyber-infrastructure that will help determine the techno-politics over ownership.

First, I want to introduce my supplement by recalling Lessig’s (2001) notion of a communi- cation system in terms of three elements: content, code, and architecture (or infrastructure). Lessig (2004) invented the ‘free culture’ concept establishing a movement promoting the freedom to distribute creative works in the form of free or open content through the inter- net, without compensation. A communication system thus has three layers, as it were; each may be controlled or free. It is possible for the content to be free while the code and archi- tecture to be controlled and owned.

In terms of this elementary model, I want to explore the current expansion of subsea or mar- ine fiber optic cables and their private ownership that will carry the bulk of messages at near to the speed of light across the ocean floor. This analysis is crucial to any question of who owns the internet, a question that bears on the development of the Global Brain.

Submarine communication cables were first laid on the sea bed back in the 1850s to carry tel- ephony traffic. The first transatlantic telegraph cable was laid in 1858, and the British dominance of the industry developed early links with neighboring Ireland, Belgium, and the Netherlands. In the 1860s and 1870s, cables were laid to India and Saudi Arabia, and one to Australia was laid as an extension of the cable laid by the Eastern Telegraph Company. Transpacific cables were laid in the early twentieth century. It was not until the 1980s that the first fiber optic cables were developed and laid. These cables provided great clarity and did not suffer from the same induc- tion effects so that fewer amplifiers and repeaters were required. Fiber optic cables provided long-term error-free transmission. Today 99 percent of all data traffic for the internet is carried by subsea cables which carry terabits per second while satellites typically carry up to 1000 mega- bits per second. Up until the late 1990s fiber optic cables were constructed by consortia includ- ing the dominant AT&T Corporation.

Mathi (2019) confirms that we create about 2.5 terabytes of data every day and 99 percent of the data is carried by undersea cables. 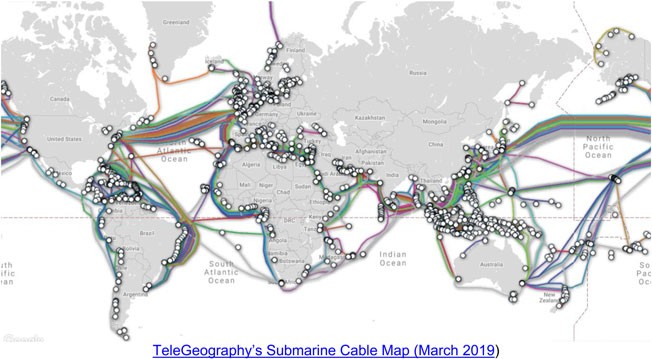 Mathi (2019) explains there are close to 400 active subsea cables. Between 12016 and 2020 about 100 new cables have been laid with bandwidth doubling every two years. The old cables cannot be expanded to cope with the increased demand and new cables provide economies of scale. He notes:

In the last five years, the cables which are partly owned by Google, Facebook, Microsoft and Amazon has risen 8-fold, and there are more such cables in the pipeline. These content providers also consume over 50 percent of all international bandwidth and TeleGeography projects that by 2027 they could consumer over 80 percent, https://blog.usejournal.com/the-future-of-undersea-internet-cables-f3e5f77de019 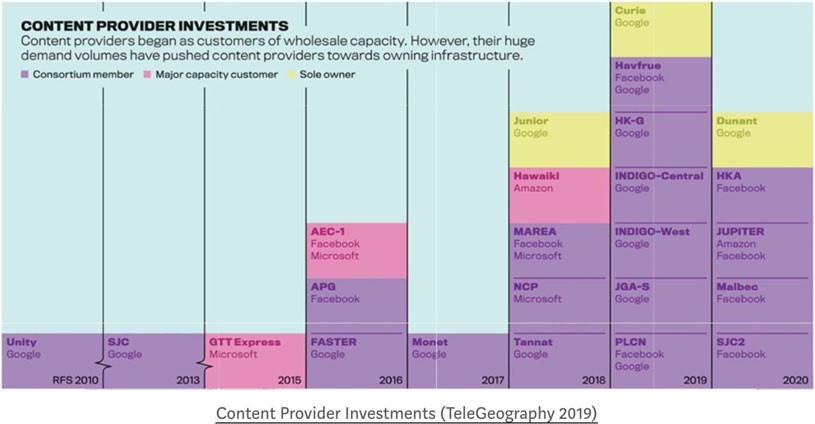 He makes the following sober analysis:

Think of the undersea cable network as the new economic trade routes and the commodity in transit as data — arguably the most important commodity of the Information Age. Amazon, Microsoft and Google own close to 65 percent market share in cloud data storage. This makes them major exporters and importers of data. Imagine them forming an oligopoly to own the routes used to transfer any data. Of course, end consumers would benefit from reduced prices that are passed on by the content providers, who now enjoy large economies of scale from owning cables. But smaller companies looking to compete will be at a disadvantage. They, or anyone else looking to use these cables, could be charged a higher price for bandwidth. This is no different from an oil cartel in some aspects. A worse, but less likely, privacy related concern is if Facebook decides to use all data passing through their cable to “improve their services”, regardless of owns the data, https://blog.usejournal.com/the-future-of-undersea-internet-cables- f3e5f77de019

The companies in question here are already more powerful than most people realise. If you need more convincing, read this article on how difficult life is without them or better yet, listen to this podcast discussing surveillance capitalism.

The podcast to which he refers is a discussion by Shoshana Zuboff of her new book The Age of Surveillance Capitalism. Both Mathi (2019) and Zuboff (2019) have little difficulty in imagining the behavior of Big Tech monopolies when it comes to the ownership, use, and control of data.

The evolutionary-cybernetic conception of the Global Brain as a model of the networked soci- ety based on distributed intelligent technologies is an attractive idea that is also philosophically inspired but it needs the supplement of political economy – of the ownership of undersea cables currently owned and being laid by Big Tech, not only from the US but also from China. Huawei is a big player in this market laying some one hundred cables: Who owns the physical infrastruc- ture –the undersea cables – will govern the internet. It may well be that anti-trust legislation will not be powerful enough to prevent the privatization of the internet and the ownership of data, information, and knowledge. It is a likely scenario but this would be a tragedy for the Global Brain.

Lessig, L. (2001). The future of ideas: The fate of the commons in a connected world. New York: Vintage.