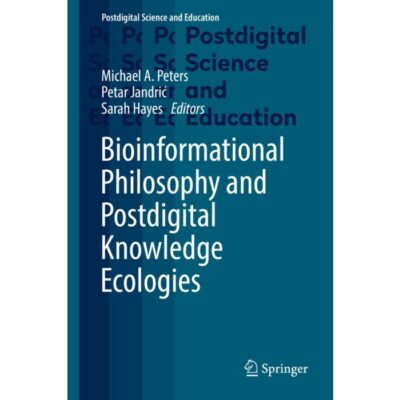 The book presents a cross-disciplinary overview of critical issues at the intersections of biology and information science. Based on theories of bioinformationalism, viral modernity, the postdigital condition, and others, this book explores two inter-related questions: Which new knowledge ecologies are emerging? Which philosophies and research approaches do they require?

The book argues that the 20th-century focus on machinery needs to be replaced, at least partially, by a focus on a better understanding of living systems and their interactions with technology at all scales – from viruses, through human beings, to Earth’s ecosystem. This change of direction cannot be made by simple relocation of focus and/or funding from one discipline to another. In our age of the Anthropocene, (human and planetary) biology cannot be thought of without (digital) technology. Today’s curious bioinformational mix of blurred and messy relationships between physics and biology, old and new media, humanism and posthumanism, knowledge capitalism and bio-informational capitalism defines the postdigital condition and creates new knowledge ecologies.

The book presents scholarly research defining new knowledge ecologies built upon emerging forms of scientific communication, big data deluge, or opacity of algorithmic operations. Many of these developments can be approached using the concept of viral modernity, which applies to viral technologies, codes and ecosystems in information, publishing, education, and emerging knowledge (journal) systems. It is within these overlapping theories and contexts that this book explores new bioinformational philosophies and postdigital knowledge ecologies.

New technological ability is leading postdigital science, where biology as digital information, and digital information as biology, are now dialectically interconnected. In this chapter, we firstly explore a philosophy of biodigitalism as a new paradigm closely linked to bioinformationalism. Both involve the mutual interaction and integration of information and biology, which leads us into a discussion of biodigital convergence. As a unified ecosystem, this allows us to resolve problems that isolated disciplinary capabilities cannot, creating new knowledge ecologies within a constellation of technoscience. To illustrate our arrival at this historical flashpoint via several major epistemological shifts in the post-war period, we venture a tentative typology. The convergence between biology and information reconfigures all levels of theory and practice, and even critical reason itself now requires a biodigital interpretation oriented towards ecosystems and coordinated Earth systems. In this understanding, neither the digital humanities, the biohumanities, nor the posthumanities sit outside of biodigitalism. Instead, posthumanism is but one form of biodigitalism that mediates the biohumanities and the digital humanities, no longer preoccupied with the tradition of the subject but with the constellation of forces shaping the future of human ontologies. This heralds a new biopolitics that brings the philosophy of race, class, gender, and intelligence into a compelling dialogue with genomics and information.